Drove all the way up to Groningen to see Hospitality at the Vera this weekend. It was a lovely show on a couple of levels, not in the least because I never expected to see them live, ever - they're not particularly huge here. As a matter of fact, their debut album caught me by complete surprise because of, well, some tweet. For which I'm still very grateful. Like their last album, the show had a charming kind of modesty to it. I think their last single, "Going Out", best sums up what this band is about - they're playful, but also have a certain feeling of heavy-heartedness about them. Their show was built upon this interplay between melancholy songs, mostly from their last album, and uplifting songs, mostly from their first - or sometimes the both of them rolled into one, as in opener "Inauguration". On the album it's a shy en quiet beauty, easily one of the best songs I've heard this year. Live, however, they stepped it up into a vigorous synth rock tune that suited them equally well. Seeing Hospitality live also reveals how intricate these songs actually are. Take "I Miss Your Bones" for example, a song easily shifting from one god knows what time signature into the other, coming to a sudden halt, firing back up, but at the same time remaining irresistibly catchy. "Nightingale" changes shape three, four times in its first half a minute before finding a steady pace, then suddenly ends in what most bands would take as an opportunity for another 20 minute stretch of stomping on their guitars. Goes without mention that I loved them for playing quite a few of the songs I know so well from their first record. "Betty Wang" in itself makes this world a better place. They kept it for their "first European encore ever", ending with it a great, great show. [caption id="attachment_262" align="alignnone" width="300"] 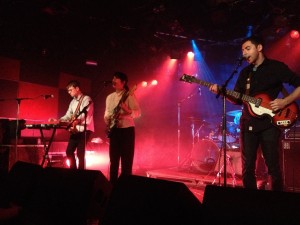